The overwhelming majority of Indians never had a problem with fellow Indians; it is the political supremacists among us who have taken up to violence as a defense mechanism. The… Read more » 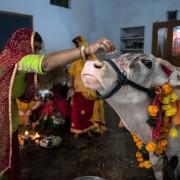