I don’t know how many Indian Americans are bigots.  but know a few who have not learned about America and the values it stands for. We have a diamond among us that shines and has become a true Indian-American hero who understands liberty and freedom. 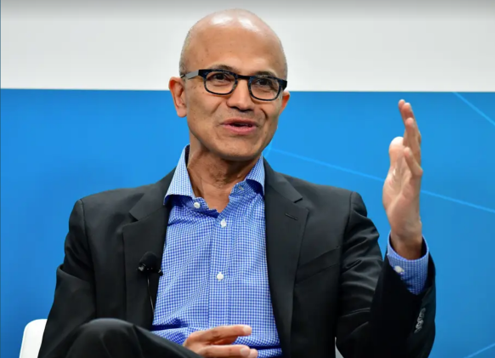 “Microsoft CEO Satya Nadella strongly criticized a new citizenship law that the government of India, one of the company’s largest markets, passed last month. “I think what is happening is sad. … It’s just bad,” Nadella told BuzzFeed News Editor-in-Chief Ben Smith at a Microsoft event in Manhattan on Monday, emphasizing the role that technology and immigration have played in his life and career. “And even a story like mine being possible in a country like this — I think, if anything, I would love to see a Bangladeshi immigrant who comes to India and creates the next unicorn in India or becomes the CEO of Infosys. That should be the aspiration. If I had to sort of mirror what happened to me in the US, I hope that’s what happens in India.”

Nadella’s attitude that will place India on the platform of prosperity, instead of getting stuck in the non-sense of regionalism, religionism, and casteism, we should be open to anyone who can put together plans and bring prosperity to all.

If you cherish to rid of Muslims, Christians, and Dalits from India, then you need to be kicked out of America, you don’t belong here.

It is shameful, that Modi-Shah duo is playing with the short-lived base emotions of Indians, and even some Indian Americans have fallen into the Modi-Shah trap of hating Muslims, Christians, Dalits, and other Indians as if it is going to put food on their plate and clothe their children. This duo is making asses out of the vulnerable Indians. How long can they do that?  Eventually, the people will wake up and figure out they were duped. They will restore their dharma and become good people again.

Modis come and go as Hitlers have come and gone taking advantage of people for their benefit.  Modi says “Hum faqeer hain.” who is he fooling? He is in it for the lust of power and control like some grandparents in their respective families. Old men threaten everyone from speaking against them.

We should not stray from the goal of wanting India to be among the top ten civilized and prosperous nations, and it happens if we value freedom. If people are free to live and work without tensions, harmony and prosperity would be the results. Modi-Shaw policies believe in divide and rule, they will continue to pit one Indian against the other. First Hindus against Muslims and Christians, then one type of Hindu against the other. They will not spare anyone, including you. They are driven by their lust for control and will destroy India. They need to resign before leaving a trail of destruction.

I commend all Indian Americans who stood up for the freedom and rights of individuals no matter where they live, the United States, India, or any nation.

Representative Raja Krishnamoorthy, spoke at an RSS rally in Chicago and said, he follows and believes in Hinduism that Swami Vivekananda taught and practiced, the inclusive Hinduism, and not the Hinduism of Hindutva.

Representative Pramila Rajagopal stood up for the freedom and the rights of individuals to life liberty and the pursuit of Happiness. Ro Khanna is firmly acting as an authentic India-American serving interests of America and not India. Who should we be loyal to?

Hindutva organization consumes you with ill-will for others, but thank God,  your American born Kids will not support your dumb ideas of exclusions. They want democracy and freedom like they have for themselves, to be for others as well.

“It was appalling to hear a representative of Hindu American Foundation announcing in a religious freedom meeting that his organization supports India’s action in Kashmir. How can an American believe that the consent of the people does not matter? The members of the Hindu American Foundation need to take a course in First Amendment to functions as good American Citizens. As Indian Americans, we need to wish for Indians what we wish for ourselves in America. The freedom to eat, drink, wear, and believe whatever works in the pursuit of their happiness.” India West letter.

Some of these guys want to denigrate India – they want India to act like some of the other countries where they don’t respect the rights of minorities, how dumb! They should instead want India to be among the top tier civilized nations that other nations can look up to emulate. It is time we the people who want the best for India to speak up. More in the India West Newspaper link below.

Modi supporters, unfortunately, want to downgrade India by supporting Mr. Modi. PM Modi is destroying India on all fronts, civility, social cohesion, and economy. He is hell-bent on ridding Christians and Muslims of India on the Hitlerian model. More in the press release.

Dileep speaks about Vasudhaiva Kutumbukum with one mouth and supports the discriminatory bill with the other. I am disappointed in his take. Did he make a mistake?

Bharat erroneously believes that Muslims can go to Muslim nations so Hindus should have a Hindu Rashtra exclusively for them. If America was a Christian Nation, he would have no place in America. He does not understand that every human is deeply attached to the land he or she is born. Muslims and Christians are equal citizens of India, if he thinks he has more rights to India than the others, he needs to extricate himself from the caste system that gives him such lousy ideas.

I urge Sant to wake up and support what is right and be on the right side of history.

The Sangh Parivar is made of several outfits from Bajrang Dal to RSS, just like the Islamist outfits such as ISIS, Taliban, LeT, Shabab and others. They all believe in their supremacy and want to dominate and subjugate others.

There is hope, the bigotry of those few Indians will end with them at the crematorium or the cemetery. Your kids will not support your dumb values of denying equal opportunities to Indians in India, while you benefit from it.

Hindutva is not Hinduism  – http://centerforpluralism.com/hindutva-is-not-hinduism/

Mike Ghouse is a thinker, author, speaker, newsmaker, and an interfaith wedding officiant. His new book American Muslim Agenda is available on Amazon, coming up are books on Human Rights and Pluralism. He is committed to building cohesive societies and offers pluralistic solutions on issues of the day. His information is at linked-in.