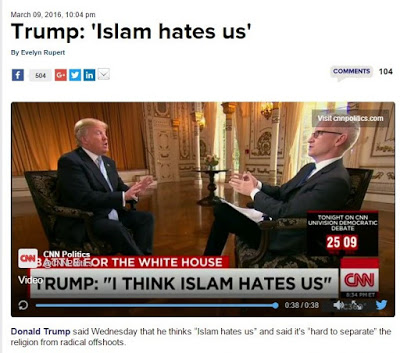 He continues, “We have to be very vigilant, very careful and we cannot allow people coming into this country with this hatred of us”.
I want to assure Mr. Trump that Islam does not hate America, nor does Islam kill people, just as Guns don’t kill, but individuals do.

Mr. Trump is seeking guidance when he says, “we have to get to the bottom of it” and I am pleased to offer my services to coach him in Islam and Muslim psyche.
Jesus did not give permission to Christians to go on the crusades, inquisitions, genocides of Native Americans, Holocaust, Bosnia and massacres etc? It is not Christians, but the men who did not get Christianity committed those crimes.

If we are inclined to believe in that non-sense, we have a serious responsibility to find the truth, and truth shall set us free.

Bad things happen because those creeps did not get their religion right.
Who do you blame, religion or the creeps?
If you blame the creeps what happens?  You’ll hunt them down wherever you can find them,  and punish according to restore trust in the society, so no one can live in apprehension or tensions.
If you blame the religion what happens? Mr. Trump, nothing happens! It is the dumbest thing to blame the religion!  Religion is not a being, it is an intangible item, and you cannot shoot, kick, beat, thrash, hang, kill or bury a religion. Let’s not bark at religion, it does not good and no problem will be solved except aimless barking.

Problem remains, people will continue to remain apprehensive and fearful of each other. Let’s find solutions to these problems.


We are indeed committed to build a cohesive America, where no American has to live in Apprehension or fear of each other.

Dr. Mike Ghouse is a community consultant, social scientist, thinker, writer, news maker, and a speaker on Pluralism, Interfaith, Islam, politics, terrorism, human rights, India,Israel-Palestine and foreign policy. He is committed to building cohesive societies and offers pluralistic solutions on issues of the day. Visit him in 63 links at www.MikeGhouse.net for his writings at TheGhousediary.com and several blogs listed there in.
# # #