Except for Kennedy’s and Lincoln’s assassins, no one has gone scot-free. The truth always comes out, and individuals face punishment.

Most of those individuals step down or go to jail. However, they have a choice to step down and retain some respect.

President Trump betrayed Republicans, they know very well that he is on the wrong side of history. Yet, they remain silent and also betray our country over their loyalty to the party.  But they are disgustingly supporting his deception – Lindsey Graham, Kevin McCarthy among the many, they will lose out in a well-run election with their sycophancy and flip flops. They need to know that he will ditch them, and say, “I don’t know them.” There is a pattern with him, and the Republicans need to think twice about standing up for him. They will lose out.

President Trump needs to acknowledge his mistakes and seek forgiveness from his die-hard supporters for betraying them; they stood by him and swallowed his lies. That is loyalty, and he should respect them for that, and be honest with them. He owes an apology to Americans and all those he mocks daily.

He has a choice to walk out respectfully, get forgiven by either Pence or Pelosi, depending on who will sit in the oval office. Let him save himself from disgrace and honor his supporters. 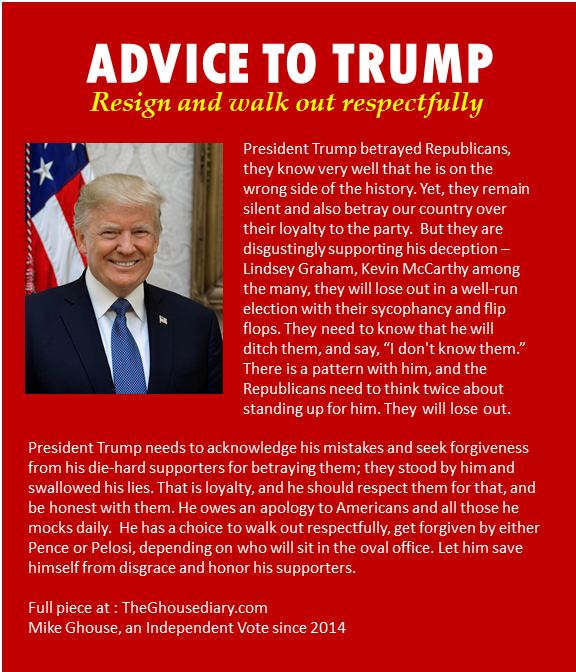