December 4, 2018. Bethesda, MD — The 19th annual minority legislative breakfast by the Montgomery county organizations was held at Marriott Hotel, Bethesda. Thanks to Dr. Suresh Gupta for inviting me to the meeting.

The most critical item was my short meeting with Senator Chris Van Hollen. I told him the mistakes the Democrats are making. The right-wing Tv and Radio are screaming that democratic Congress is only interested in impeachment and not doing what they were elected to do. I asked him to let Americans know that the Congress has passed over 100 bills, but Mitch McConnel, the majority leader in the Senate, is holding the laws passed, and not placing for the vote. The public needs to call their Senators to do their job. 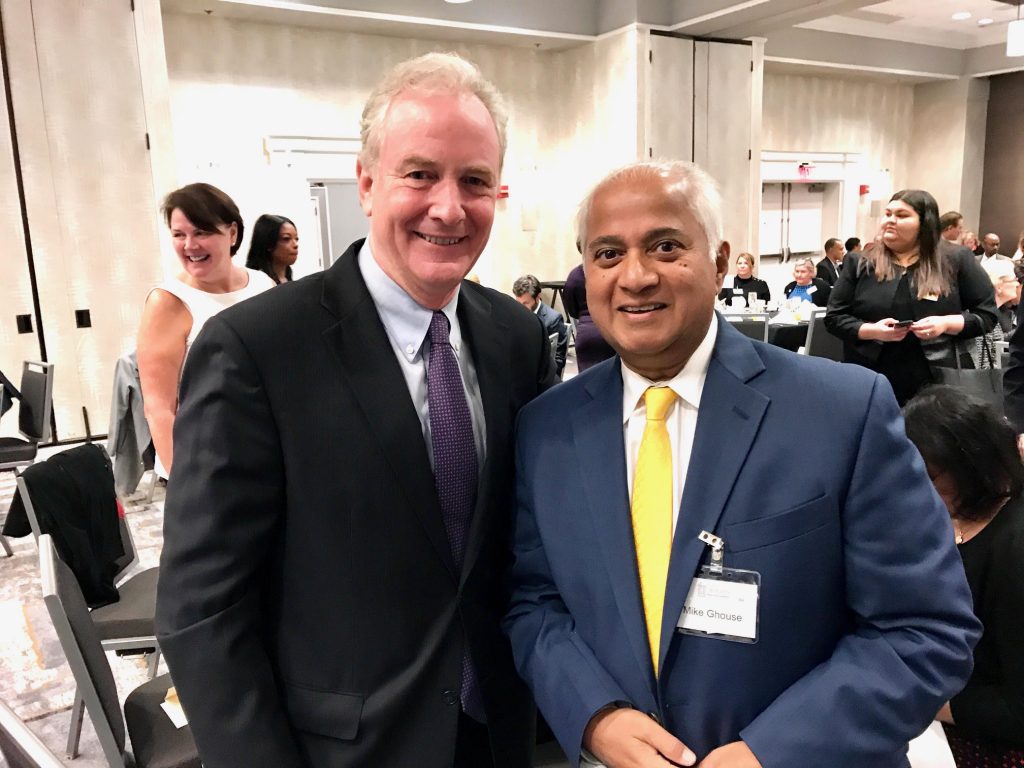 Chris Van Hollen said, he will talk about it now and will bring up in the Democrat meetings. Indeed, in his short speech, he spoke about it, Americans have to call the Senators to work the bills presented by the house.

Most of us meet the Senators and Congressmen, let that short meeting be purposeful, they will listen intently, it if affects them, and they will take action. For the next few months, the same item can be relayed to every Senator and Congressman.

Several elected, civic, and business leaders from state and county attended the event, about 300 people.

Dr. Suresh Gupta is an internist and has been practicing medicine for over 40 years in the United States and most of it in Montgomery County. He is involved in all aspects of serving fellow citizens and has affiliations with over ten different organizations as a chair, director, or trustee. It was a joy for me to see the Senators, Congressmen appreciated a fellow Indian-American, and the critical public officials call him by his first name. Dr. Suresh Gupta is a great American.

A Profile of Dr. Suresh Gupta

He is 64, married to Maansi, two children, married son 37 is a Neurosurgeon, married daughter 34, Attorney for Amazon, and one-year-old granddaughter.
Moved to Washington on May 23rd, 1981, after graduating from Medical School in India, in 1978, over 41 years ago.
A Marylander/ Washingtonian all his life in America.
A practicing office-based Physician in Internal Medicine & Geriatrics, past 33 years plus in Silver Spring Maryland.